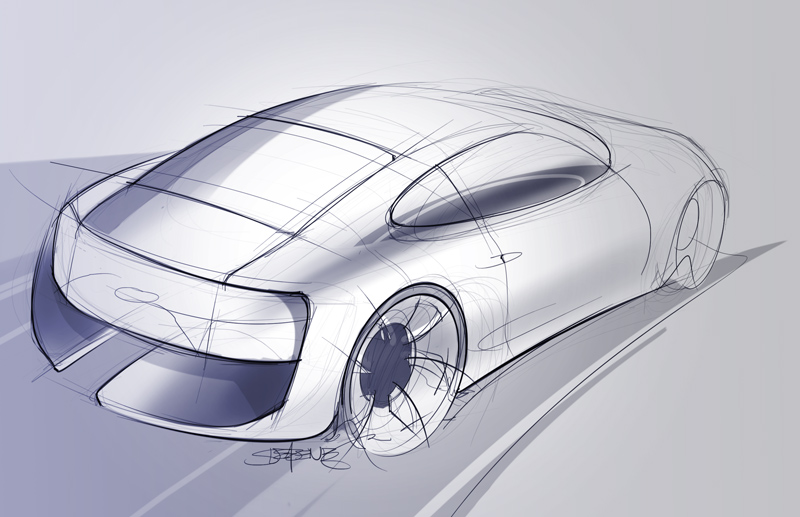 I’m starting to get used to my Wacom tablet more and more, though I still find it frustratingly difficult to control the pen while drawing little details. The problem is that it’s an old tablet from 2006 (Graphire 4), and it has no tactile feedback – so basically it’s like drawing on glass with a ball point pen. It’s hard to describe, but it would be really nice if the drawing surface was a bit more rough, and the pen tip was softer. That way the pen wouldn’t have a tendency to slip and slide across the surface so easily as it does now.

Anyway, as mentioned in my last post, I wanted to work on my line weights and overall “punch” to my car sketches and this is the result. It’s still pretty sloppy, but that doesn’t bother me much – I’m not trying to create technical (photo realistic) renderings here. The idea is to keep my drawings fast and loose, with emphasis on form and surface development. I feel like I’ve got a long way to go in terms of style though – I copied the design of the rear end of this car from another sketch I found on the internet so that’s why I didn’t struggle though this drawing so much. But I’ve got to admit that it’s tough coming up with my own designs.

I also added a bit of shading and simple reflections to this sketch. Not much, but they help to define the surfaces a bit. I think I rushed through it though, and I’m not happy with the “spotty” look to it. Viewed from a distance, there’s no “flow” and smoothness – it just looks like a blotchy sketch to me with dark spots all over it. I need to work on that for sure.